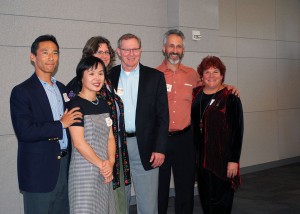 Winners of the Helen Stevens Outstanding International Educator Award posed for a picture at the award reception with their husbands. Yasue Yanai, second from left, Tamara McKinnon, third from left, and Linda Levine, far right, were selected for recognition for their outstanding efforts to provide a global education to SJSU students.

“It was the first time I earned a scholarship and traveled independently (of my family) and shared a room with someone I barely knew,” Balthazar said, noting that she also raised money on her own to take the trip.

She said Levine and her husband David Buseck, an SJSU professor and co-teacher of the program, helped the students navigate the city and learn many things.

“When we first arrived in Paris, we didn’t know how to use the Metro, but we had Linda and David there to help us.”

Stevens said her first interactions with Levine came when she was still the director of IPS when Levine facilitated retreats for her office. She said Levine helped the department learn to collaborate within the office and also with other departments on campus.

“When she and David proposed a faculty-led program in Paris there was not a doubt that it would be a truly successful program,” Stevens said.

Levine and Buseck continue to work with students who’ve accompanied them to Paris, with monthly invitations to their home to speak French and talk about French culture.

Levine’s love of travel started young as her parents were international tour directors. She said when her father passed away he had been to 132 countries.

“I know there are a lot of talented people and passionate people doing global works,” Levine said. “Any of those people could have easily been chosen for their outstanding work.”