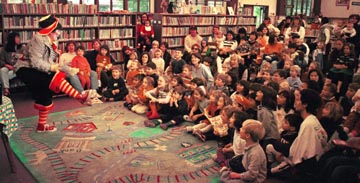 Levine performed as Rainbow the Clown to a full house of children and their parents at the Palo Alto Children’s Library. Levine encourages parents to sit where they can see both her and the reactions of their children.

Seeing 70 kids with their faces lit up, eyes wide with amazement, jaws dropped in awe, packed into a small children’s library is routine to the woman known as Rainbow.
“You still have another glove on,” the kids screamed in unison as Rainbow removed the second colorful glove from her hand.

Three is a magic number for clowns. 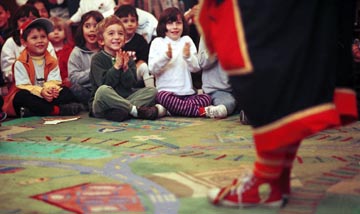 There is more to her juggling act. Rainbow the Clown is also known as Linda Levine to her San Jose State University students. She has been teaching in the recreation and leisure studies department for 11 years.

She’s been entertaining audiences for 30 years, such as the crowd of kids and their parents that erupted into laughter as Rainbow finally pulled off her third glove at the Palo Alto Children’s Library during a recent performance

At 13, she performed as a mime on the streets of her hometown, Cincinnati. 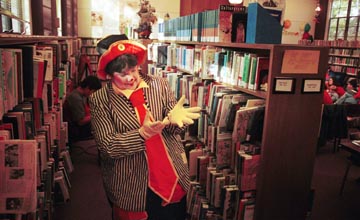 “I would stop people in their tracks, give a little joy to them and send them on their way,” Levine said.

The energetic teacher appears to bring the same appreciation of life into the classroom, intertwining magic and juggling in her courses.

“I love the courses that I teach,” Levine said. “I love that I can teach people to stop and pause and celebrate life.”

In the class Creating A Meaningful Life, Levine has students write down all the bad things

they hold onto and put them in a bag. When she opens it, flowers come out.

“This helps with the students’ perception of life and how they look at things. They can reframe misfortune and invite more beauty into their lives,” Levine said.

In addition to the magic Levine uses in her classes, she also connects personally with the students.

“She has an uncanny ability to see into situations,” said Saralyn Boyd-Winslow, the recreation and leisure studies department secretary. “That’s why she is such a great instructor. She can see what leads students to do the things they do. She really cares about the students as people.”